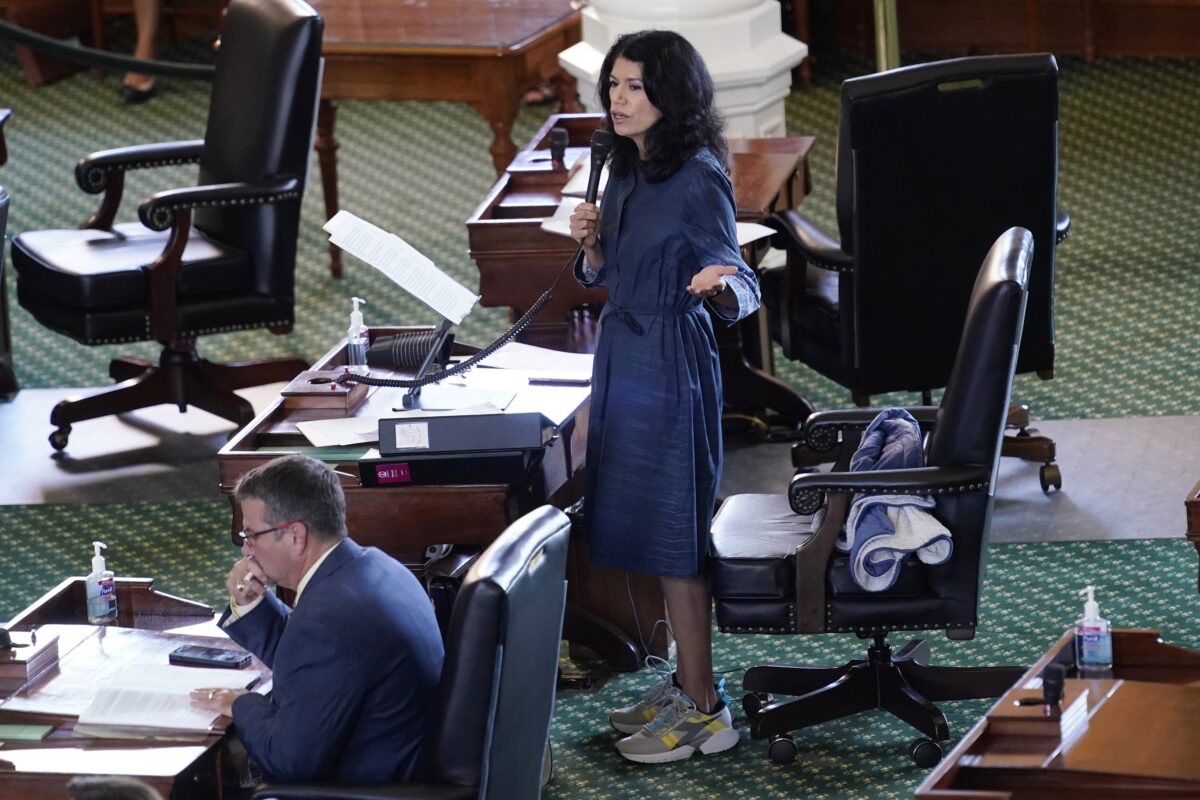 All I hear from Democrats is that the Republicans are trying to “suppress” voters’ rights…but I haven’t heard ONE true fact about HOW they are suppressing LEGAL LAW ABIDING AMERICAN CITIZENS ability to vote. Do they have facts? You know if they actually had any real legal law-abiding American citizens who said they felt that their voting rights were being suppressed the lying radical left media would eat it up and re-run it over and over. But they don’t, because LEGAL LAW ABIDING AMERICAN CITIZENS have every access to vote. My Grandfather’s Mother came from Mexico LEGALLY. He served in the Marines, and he fought in wars for this country. He HATED the fact that people could hop the border, be criminals who broke the law continuously break the law by voting, and NOTHING happens to them, and receive open-ended funding from the federal government on legal American citizens hard-earned money. STOP MAKING EXCUSES FOR LAWLESSNESS DEMOCRATS! IF YOU WANT TO FUND ILLEGAL CRIMINALS USE YOUR OWN MONEY, START A NON-PROFIT.  THE LEGAL AMERICAN PEOPLE DON’T WANT THEIR HARD-EARNED MONEY SPENT ON ILLEGAL CRIMINALS! IF THEY WANT ASYLUM THEY CAN PAY THEIR OWN WAY AND OBEY THE LAWS OF THIS COUNTRY. THEY DON’T HAVE THE RIGHT TO VOTE! ENOUGH IS ENOUGH! Written by a Mexican in the United States as a LEGAL CITIZEN!

The Texas Senate approved an election overhaul measure on Aug. 12 after a Democrat senator ended a 15-hour filibuster. The Republican-controlled body passed Senate Bill 1 (pdf) on an 18–11 vote just moments after state Sen. Carol Alvarado, a Democrat, stopped speaking at around 9 a.m. Alvarado had been standing on the floor since just before 6 p.m. on Aug. 11. Authored by Republican state Sen. Bryan Hughes, the bill would tighten up voter roll maintenance, expand early voting hours, and force employers to give workers time off to vote, whether on Election Day or on other days. “We talk about easy to vote and hard to cheat, and that’s what the bill’s about,” Hughes told colleagues in Austin, Texas. Alvarado accused Republicans of trying to implement voter suppression. “Senate Bill 1 slowly, but surely, chips away at our democracy. It adds, rather than removes, barriers for Texas seniors, persons with disabilities, African Americans, Asian, and Latino voters from the political process,” she said. Filibuster rules prevented Alvarado from taking food or water or sitting or leaning overnight. She didn’t speak continuously, with both Republicans and Democrats taking turns discussing provisions in the legislative proposal. The bill would be sent to the Texas House of Representatives, but the lower chamber isn’t in session because it lacks a quorum.

Democrats in the state House fled to Washington last month. The Texas Supreme Court ruled on Aug. 10 that Republicans could legally move to compel their colleagues from across the aisle to return to Austin, a ruling cheered by Gov. Greg Abbott. Texas House Speaker Dade Phelan then signed civil arrest warrants that were delivered to the offices of the Democrats by the sergeant-at-arms. No Democrats have been arrested and Texas authorities haven’t shown any inclination so far to track down the missing lawmakers. It isn’t clear when the stalemate could end. While Republicans control both legislative chambers in Texas, as well as the governor’s mansion, two-thirds of lawmakers must be present to constitute a quorum. Republicans only hold 82 seats in the 150-seat lower chamber. Some Democrats are saying that they won’t return to the Capitol voluntarily. “There’s a warrant out for my arrest because I’m standing up for your right to vote. I won’t back down,” Democrat state Rep. Michelle Beckley wrote on Twitter.